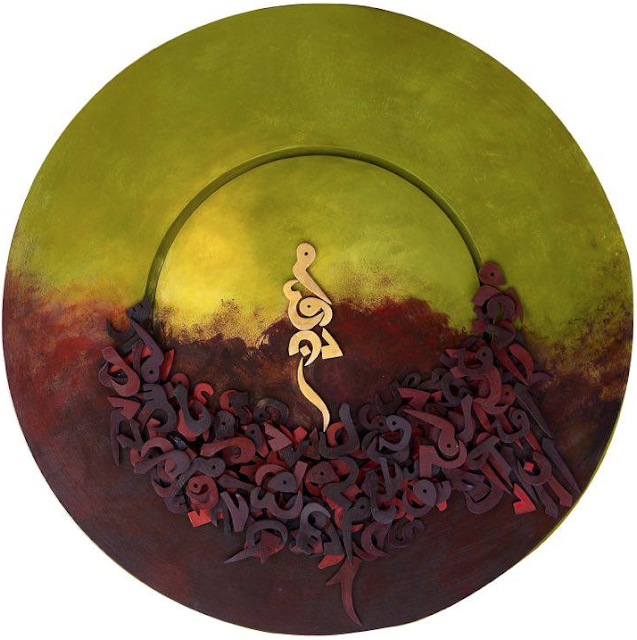 was born in Baghdad in 1950. At an early age she watched the full creative processes of jewelry, costume, textile, and woodwork crafts. Her works are accompanied and blended with the deep Iraqi art layers including iconographic rock-art symbols and the wider western Asian and Arabic cultures. Madiha Omar (1908-2005), another important influence, was the previously mentioned Iraqi pioneer of Arab word painting. A self-taught word and iconographic painter, she has become internationally known through exhibitions in many solo and group shows in the U.K., U.S.A., and Middle East, as well as through her new book. She earned a degree from Baghdad University.

Political circumstances forced her into an unwilling exile, moving to Bahrain. Works thus exhale the strong perfume of an exile’s longing for home, the tangible colors, sounds, and aromas, and the intangible spiritual, wafting auras.

Her painted iconographic series, “Postcards from Mesopotamia,” is a dance with the history of symbolic and written languages of western Asia, demonstrating her skillful polychromatic hand, her bright visionary eye, and her ability and ease to transform time into space. Beautiful as the series is, it is also a dirge, a lament for the looting of Mesopotamia in the Museum of Baghdad in 2003. “It was this loss, and the grief I felt when I first heard of the crime that inspired me with the idea of reproducing these priceless pieces in my paintings.”

Her solo exhibition,“When the Word Turns into a Fragrant Ray of Light,” presented works inspired by the poetry of Mahmoud Darwish. Her book, Do Not Unveil My Colors, A Homeland Sleeps There, contains many of the exhibited works of this beautiful and haunting exile collaboration. Her vision is expressed not with just the two-dimensional plane vibrating with letter forms like those of her forerunners and peers but with polychromatic, painted, sculpted letters on traditional canvas and canvas itself at times a sculpt field suggestive with one work and demonstratively emphatic with another the lexical beauty and spiritual aura of the Loay Taha-rendered poem.


(Extract from “The Painted Word,” a history of visual text art by karl kempton www.applepie-editions.co.uk p. 298) 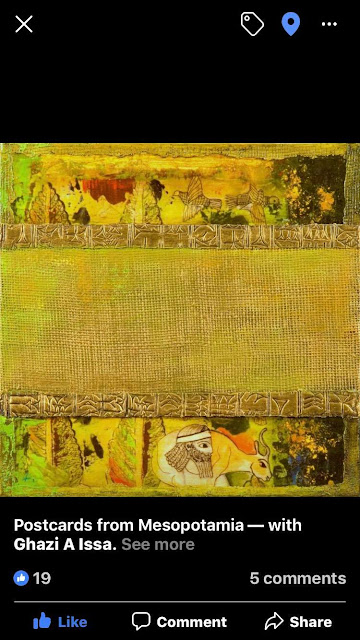 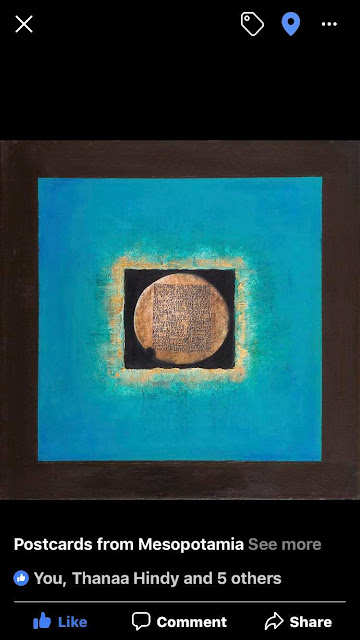 Do Not Unveil My Colors, A Homeland Sleeps There, Firyal Al Adhamy and Loay Taha. Reviewed by karl kempton

Do not
unveil my colors,
a homeland sleeps there!
Do not unsettle the
dust of my sorrows,
but let it soundly sleep.(1)

Exile. The Firyal Al Adhamy, an Iraqi word painter (2), and Loay Taha, a Syrian poet (3), collaboration articulates with painted letter and lexical poetic word their individual exile experiences to unveil the longing memories of loss of their beloved homelands. Before this highly accomplished project suggested by Loay Taha, Firyal Al Adhamy had created a body of painted work depicting the deep history of symbolic and written languages of Western Asia in which she demonstrated her skillful polychromatic hand, her bright visionary eye and her ability and ease to transform time into space. One of her major influences was the Iraqi pioneer of Arab word painting, Madiha Omar (1908-2005). Many credit her as the first Arab language word painter. One of Omar’s influences was the French surrealist Andre Masson.

I am a dot and you a dotted letter.
Without your letter I am an orphan,
and you without me an illegible letter

Firyal Al Adhamy’s abstract word or letter painting strikes out on innovative multimedia pathways combining a spectrum of bright to dusty colors, traditional canvas surfaces and nontraditional shaped canvas. All surfaces hold painted letter sculptures, sculpt letters attached to the surfaces adding to the rhythmic dance of colorful flowing forms counterposing the accompanied haunting and at times deep woe-filled exile poems by Loay Taha.
To provide an understanding of this collection if one is unfamiliar with it, I suggest a look at the Latin letter o whose original Roman form consciously reflected the circle and was the basis for the designed shaped ratios of the other Latin alphabet letters. However, that is as deep as it went since the Latin alphabet lacks a deep esoteric depth equivalent to Sanskrit, Hebrew and Arabic. Peer into the haunting flute’s o shaped mouth piping remembered incense from many forced exiled years or the exile’s tears overflowing a perfectly o shaped ceramic cup mouth or the perfumed dust rising off the o shaped tight pulsing drum skin. This is the same o found in loss, home, woe, longing and echo. They all roll in o’s memory, its radius expands and contracts accordingly with a triggering fragrance in an alien landscape.

THE PHILOSOPHY OF LOVE

Sometimes I practice with my loved ones the philosophy of
beautiful absence to render longing more delicious and beautiful.
I pull away for a while to repaint the features of the encounter
as if it were the first. I give absence the flavor of love.

This o is the doorway in the word home. When opened, deeper into the collection we travel. There are the references of its perfection when it points to the whirl of the Sufi who seeks an end of exile from the true homeland of the heart. There is the constant running theme of the esoteric layers found in every letter’s shape and meanings. Time spent reading and viewing depends upon how deep and wide one’s desire to probe two visions combined that makes for a doubly unfathomable dive.

On board the plane of love your smile travels,
and on the stairway of my soul it peacefully lands. 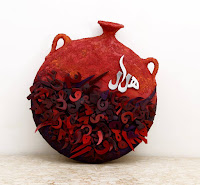 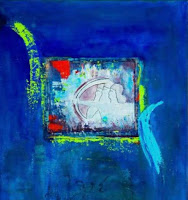 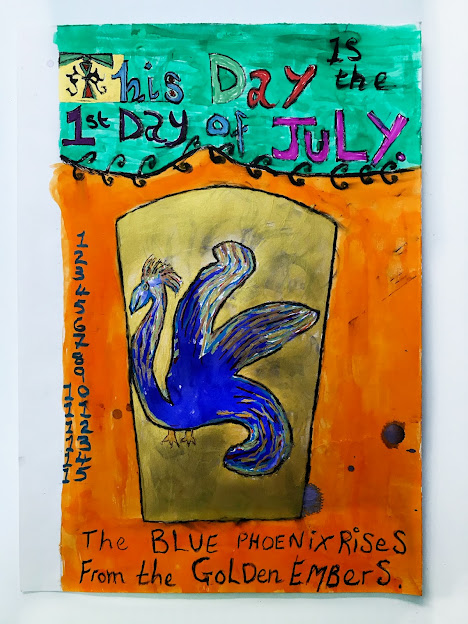 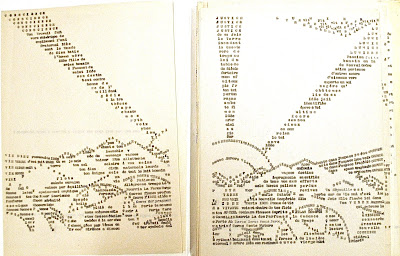 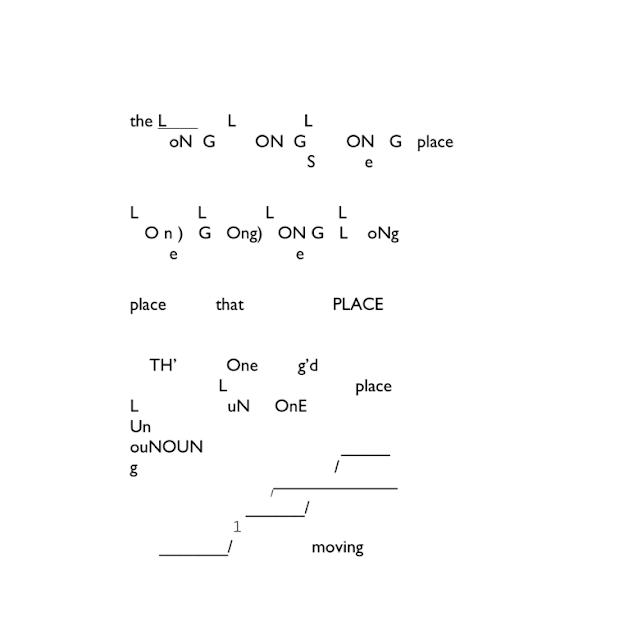