SYNAPSE ESSAY THE EIGHTH: another cast of the dice / by Paula Claire 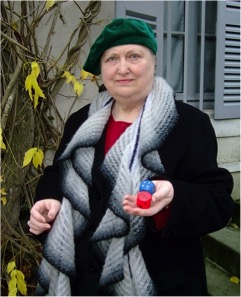 My husband and I visited an old friend of his who had fallen in love with France and bought a house by the Seine, in Chartrettes about 20 miles south-east of Paris. We started going there in 2002, but not until 2009 did I discover that a few kilometres upstream in Vulaines-sur-Seine was a museum: Mallarme’s retreat, of the sort that so many Parisiennes have, an escape route from the city.

Had to go, our kind host drove us. The old house was directly on the river, just an unmade lane between it and the strong torrent, with a narrow front garden hedged with shrubs. The house is simple, full of memorabilia with at that time a Custodian sitting trustingly downstairs. Upstairs the bedrooms and his study overlooking the Seine.

I could not stop myself: I sat at his desk to see what he saw. The wide Seine in spate, muddy swirling waters 3rd December 2009. That unstoppable flow from left to right, it must have flushed out all old ideas from his creative consciousness and caused that leap that takes us all into space exploration with him: Un Coup de Dés jamais n’abolira le Hasard.

I was so filled with energy I had to get out of the house and into the large back garden, lawn, fruit trees, plenty of room for vegetables in its simple winter garb. I took the dice from my pocket and asked my husband to film me as I spoke a few words about my pilgrimage and hurled the cubes in the air.

Visual text art, as Dick Higgins’ magnum opus Pattern Poetry, Guide to an Unknown Literature (SUNY 1987) (purchased by me signed/dated 28.3.88) copiously demonstrates, has an illustrious world-wide history in many languages from ancient times that he comments on with illustrations.

Dick stops his survey around 1900. The importance of his book is that it underpins all the international aspects of the Modern Movement. A specific work does seem to elicit that rare response, agreement among scholars. This is Un Coup de Dés jamais n’abolira le Hasard, Stéphane Mallarmé, first published in Cosmopolis, a multi-lingual literary magazine, the lead version issued in LONDON May1897, a year before the poet’s death. It was not till 1914 a small limited edition of 100 was published in Paris. It remains for me a seminal work because of its staggering innovations: ONE the carte blanche the blank page is an emblem of infinite space with which the mysterious Symbolist poem with its key image a shipwreck engages; TWO the words are disposed across the double-page spread – 11 spreads in total, i.e. across the gutter divide, representing both a chasm and a challenge to leap over; THREE not only are the lines spread out in an ever-varying motion like the waves the text speaks of, but they are in different sizes of typeface, one long passage using italics; FOUR the title of the poem is printed in large capitals, the words spaced in an irregular way across the flow of pages. There is a huge amount of information on the internet including the handwritten early drafts and printed versions; much musing on the meaning of the enigmatic text, amorphous like the great impressionist paintings of the period that dissolve substance.

The dice I threw came down in the grass, faces in opposition: 4 blue 3 red = 7. It is an ancient conviction that word and number are twin aspects of universal coherence. Then we left: Paul took a photo: me in the narrow garden in front of Mallarmé’s house showing you the result of that toss = 7 in the back garden. I walked out the gate and facing the River Seine chucked those dice over my shoulder back into the front garden and walked off. Never to know what the dice decided – the elixir of the unknown - we do not know what we do not know.

It’s the only thing I know.

7 = the Seven Stars in my constellation TAURUS – guiding stars. I wrote the poem The Seven Sisters in July 2009 celebrating the 7 atlantic blue cedars along an ancient meadow bounded on 1 side by the River Thames just near our house in central Oxford we have fought to preserve as a community green retreat and succeeded: it is now our ‘Queen’s Field’ astonishingly rich in flora/fauna, forbidden to be changed. This poem, my voice, electronic treatment and blue whale song ends my CD The Clue 2010, a snippet can be heard on my website in ‘hear my poetry.’